API v2 for Call Control has been designed to make migration smooth. This guide highlights the main changes to be aware of when migrating your Call Control application from API v1 to API v2.

Call Control in API v2 offers the same great call experience but with some changes aimed at making it even easier to have granular-level control over your calls. For new Telnyx users, SDKs available in multiple languages and the introduction of TeXML enable you to get started in minutes. For users with an existing API v1 application, we’ll cover the main changes you should make to migrate to our latest API version.

There are three main areas that require minor changes:

API v2 utilizes a different authentication strategy that will require you to generate a new API key for your Call Control application. You can do that easily via the Telnyx Mission Control Portal.

Once you have logged into your Mission Control Portal account, in the left navigation click “Auth”. Then, ensure that Auth v2 is selected in the horizontal navigation.

Once a key has been successfully created, you can disable or delete it easily from the main Auth v2 page. Information on creation and recent usage of each key is also available.

Next, let’s compare the webhook response for when a call is answered in both API v1 and v2 so that we can see the differences:

Firstly, you will notice that the structure of the payload has changed. There is a top-level data object that contains all subsequent information about the webhook. You will also notice that the top level created_at field in API v1 has been renamed occurred_at - this is the time that the event occurred.

The naming convention of the event_type field has also changed for API v2. While the field names remain in snake_case, for event_type the call event being described will be in dot.case for all call events. Events can contain multiple dots to indicate a relationship.

API v2 webhook structures are not enabled by default. To begin receiving webhooks in the new format, you will need to update your Call Control Application settings for any application you wish to migrate to API v2. 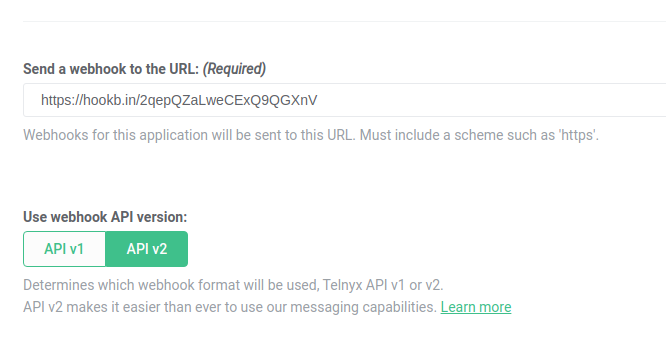 Each messaging webhook event that we send you will include a Telnyx signature. The signature allows you to validate that webhooks were not sent by a third-party.

While API v1 uses an HMAC with the SHA256 hash function to sign webhooks, API v2 uses the EdDSA digital signature scheme with a public key.

In API v1, webhooks can be validated using information in the X-Telnyx-Signature header and the raw request payload of the webhook in bytes. You can read more about webhook validation in API v1 here.

Webhook signing in API V2 uses public key encryption. Telnyx stores a public-private key pair and uses the private key to sign the payload. The public key is available to you so that you can verify the request.

Your public key can be viewed in the Mission Control Portal.

The signature for the payload is calculated by building a string that is the combination of the timestamp of when the request was initiated, the pipe | character and the JSON payload. The signature is then Base64 encoded.

The signature (Base64 encoded) and the timestamp (in Unix format) are assigned to the request headers telnyx-signature-ed25519 and telnyx-timestamp respectively.

You can then use cryptographic libraries in your language of choice to verify the signature using the public key. For examples, please see:

API v2 commands have different endpoints to API v1 commands. The base URL for API v2 is https://api.telnyx.com/v2/

The commands carry out the same functions, just at a different URL.

To answer a call in API v1: https://api.telnyx.com/calls/{call_control_id}/actions/answer

To answer a call in API v2: https://api.telnyx.com/v2/calls/{call_control_id}/actions/answer

For further reading, you can view the Call Control API Reference here and quickstart guide here.

Was this page helpful?